I think I may well be in the throws of writing the hardest song I’ll ever write.

I got home at around 10pm this past Wednesday night after having had dinner with a dear friend who met me at the store as I was coming off my shift and I happened to surf through my incoming text messages as I was unwinding to discover my cousin Debbie’s Facebook post from earlier that night which read:

My mom is the eldest in her family, Deb’s mom the second eldest, so the two were particularly close while growing up -and for a variety of reasons, one of them being a shared love of songwriting, Deb and I have grown close in recent years. 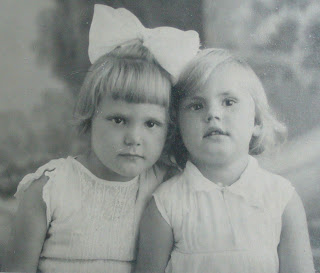 THEN: Mom (left) & my Aunt Poppy as kids in Holland.
That's some massive bow atop Mom's head, ain't it?! 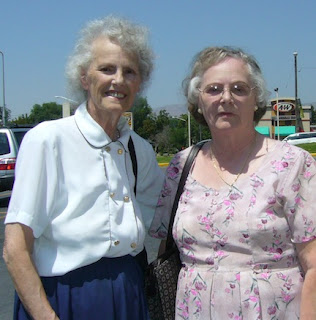 Deb’s mom was diagnosed with Alzheimer’s about a year ago now. Deb’s a single self-employed SuperMom of two.

Deb is one of five kids in her family. When her mom’s condition worsened and it became evident she could no longer live alone, it was Deb who took it upon herself to ensure her mom the care she needed. But pretty quickly, Deb noticed a decline in her mom’s spirit and made the noble but harrowing decision to move her mom in with her full-time --Alzheimer’s and all.

Needless to say, Deb is one of my hero(ine)s. And though she’s younger than I am, I aspire to be like her when I grow up. 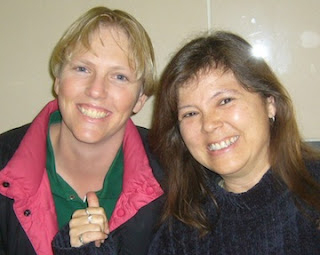 That's Deb on the left. Can you tell we're related? ...lol

Deb and I are fairly in touch despite the fact that we live a couple of states away from one another, so I’d been aware of the ups and downs of my Aunt Poppy’s condition, but learning that Deb had recently experienced for the first time what I can’t help but think has to be one of the most heartbreaking experiences with Alzheimer’s -your own mother not recognizing you- broke my heart --and triggered a flood of thoughts and emotions: love for and fear about the mortality of my own aging mother (not that it isn’t already very much in my awareness), about my Aunt Poppy’s long (and emotionally painful) goodbye (as I’ve heard it called) with Alzheimer’s, sadness, love, and empathy for Debbie’s experiences with her mother. 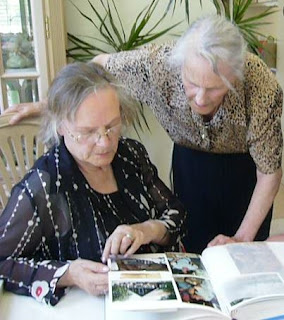 Mom & Aunt Poppy sharing incredible memories.
World War II Nazi-occupied Holland, they grew up in
...and are still here to tell about it!
...for now. 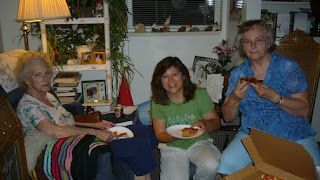 Mom & I visiting -& having a pizza party with- Aunt Poppy 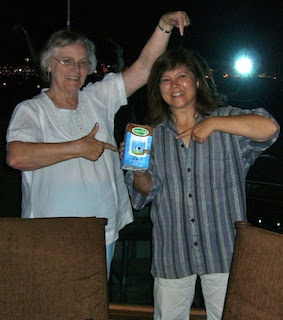 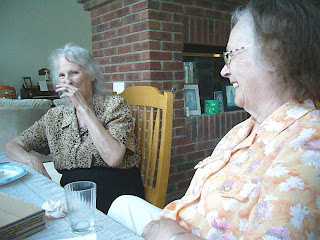 Aunt Poppy & Mom laughing together. I love this shot! 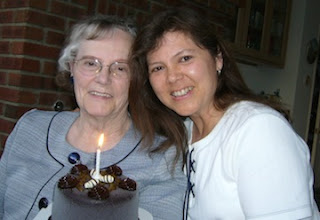 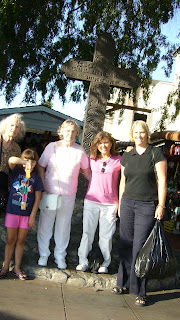 All of us, together!

Within minutes of having read her post on my phone, words set to a melody I can only describe as “haunting” came to me so strongly that I bolted up to my recording device to capture it before it vaporized, as these things have a way of doing.

I’ve been in the throws of writing, recording, and mixing the song in the days since. Truth is, it’s been consuming me -in between my shifts at Starbucks, of course. It’s taken so much out of me that I felt for a day or two there like I’d been hit by a mac truck. Surreal it’s been, to say the least.

Out of curiosity, I revisited the original vocal snippet I’d recorded when the song first began to come to me and discovered, much to my surprise, that it was not just a line or two, but the entirety of the chorus that flowed out of me that night. For me, that’s unusual. Very.

Anyway, here’s the very first “take” of it:


--just the guitar and my very raw initial vocal that I recorded after 11:00 at night. Had no intention of keeping the very first vocal take as it’s almost always strictly for helping me build the song by -at least how I do it. In my case, the first take is usually quite bad --and you're probably getting a prime example of that here. But the more I listen to that first take, the more it’s grown on me, flaws and all --because it’s real. I laid down this first vocal when I had just finished writing the song and I think it captured the guts-out emotional rawness that giving birth to the song rendered --and I think it somehow captured a downright magical quality: I hear -and feel- in it a forlorn “little Michele” crying out for her Mom ebbing and flowing, waxing and waning with the grown woman I am at present. And that’s about as “real” as it gets.

And through all of this, I can’t help but think about how the world and my life experiences to date virtually snuffed out the music in me along the way (freakin’ lucifer) -but I now believe with all my heart that God protected that last burning ember from going out --because it’s always been there in my heart, however quietly-- while working the various jobs that I’ve had through the years, while doing laundry, while balancing the checkbook yet again, while paying the bills, through the meaningless rat race, and even as I sweep, mop, haul trash, clean the bathroom, do dishes, and make lattes in that green apron.

Despite the world telling me for decades otherwise, somehow, I always knew.

And I wish I were ready to share the studio version that I’m working on with you --‘cause God is doing amazing things to it!
Posted by michele at 2:55 AM