The Starbucks store i currently work at is not the store i originally got hired to work.  Some two years or so after signing on to my employment at Starbucks, an opportunity arose and i was offered a “trial run” at another store.  It was then that i first met Judy and Carol and it was they that, in large part, sealed the deal in my decision as i agreed to the transfer.  There are wonderful “partners” (Starbucksese for its employees) at every store i’ve had the opportunity to work at, but both Carol and Judy were hysterically funny, sarcastic as shit -like myself, and ...just more mature and “age-appropriate” for me.  Both Judy and Carol are single mothers.

A few weeks in to my new post, in to the store walks this kid in his late teens wearing a bandana around his forehead with what looks to me like Japanese writing on it which of course, caught my attention.  Any kid who wears a bandana with Japanese writing on it scores points from me ...just because. This was my first impression of Shane.  Who turns out to be Carol’s son -Carol’s only child.

When Shane learned of my ethnicity, he asked his mom if she would ask me to translate the writing on the bandana i soon learned he seemed to wear always at the time, as he was wearing it every time i saw him.  So Carol brought it in for me to take home so i could ask Dad to translate it for him ...since i’m personally incapable of such a thing.  Once the translation reached Shane, Carol informed me how elated he was to have received it.  Way cute.  My first personal connection and interaction with Shane.  Any kid who expresses interest in one of my cultures is a friend of mine ...just because.

So i’d see Shane from time-to-time, more by default than anything ...because i worked with his mom.  Sometimes he would pick her up after work, so i’d see him then.  Sometimes he’d be early to pick her up and he’d make faces at us through the glass windows while his mom and i finished closing the store.

Specifically, there was the Angels game.  Of 2010.  Three years ago, already.  Mike Scioscia (manager of the Angels baseball team) is a “regular” at our particular location, and is one of the nicest people to grace our store.  Generous to the degree that he has invited the entirety of the staff of our store not only to attend a game, but got us all passes to be out on the field with him pre-game and access to the VIP area, which we took advantage of dining in together.  Shane joined his mom and the rest of us for that happy occasion.  We rode to and from Anaheim - probably an hour and a half drive each way, mind you - with Shane busily playing DJ in the car by changing out the music on the stereo the duration of the trip. 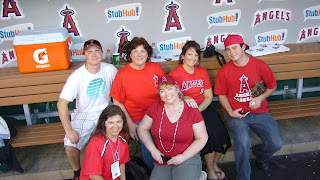 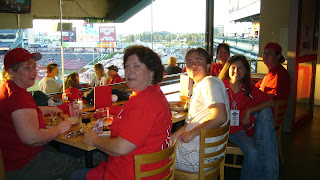 all of us dining inside the VIP area at Angels Stadium

There were a smattering of other occasions we interacted, Shane and i; private moments when he and i would mosey away from the crowd to smoke a cigarette together from time-to-time, or he’d occasionally simply “bum” one from me but, maybe almost oddly, my favorite interaction with Shane -which struck me as special even just after it happened- was the night i was going to check out at my local Target.  In that moment, i’d forgotten and wasn’t thinking about the fact that Carol had told me that Shane was working there, and as i was waiting my turn for a cashier, a male voice swooped by calling me by name saying, “I can take you over here, Michele”.  i was touched by that particular interaction; how observant he was to have spotted me, how intentional and thoughtful and ...sweet.  And it’s that interaction i keep flashing on most.

Tuesday, August 6th, i was invited over to a friends’ house who lives near the store after work.  i left their home just before midnight and was taking my usual route home from work when i came upon what felt like a surreal, albeit serene and peaceful scene: a police car parked horizontally in my path at an intersection.  It took me a second to adjust for it being so unexpected and odd and wasn’t quite sure what to do.  i then noticed a lone police officer standing on the meridian just outside my car window to the left, but he made no effort to communicate with me; no motioning to go this way or that; nothing at all.  It felt strangely quiet.  Eventually i figured i best take the only evident alternative and made the U-turn taking me in the complete opposite direction of my intended destination.

We lost Shane as he was riding his motorcycle having left his grandmother's, where he was residing at the time, just ten minutes prior the night of August 6th.  And that was the reason my path home was closed off that night.  Had i gone home after work as usual, instead of going to my friends' home, it would have put me exactly there around the very time Shane crashed his bike and lost his mortal life.

i have a hard time believing that how that night played out for me is coincidental.  It is not.

i learned that we’d lost Shane by way of a friend texting me about her concern for Carol on Thursday, the 8th.  That was around 5pm.  By 6pm, i found myself writing “Shane’s Song”.

i hope he likes it.  i will miss him. 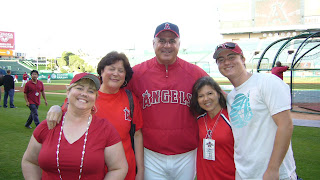