Do you know that in France (and maybe elsewhere) it is considered rude to ask someone what it is they "do" (for a living)? I "get it", France, and think you're far more evolved than we here in the U.S. of A. are about this.

So, I'm a barista at Starbucks. That's what I "do" and what I've been doing for the past 5 1/2 years of my life as I launch this blog. Every job I've ever held has been the result of a great deal of thought and research on my part, and was the case concerning this one as well, believe it or not. 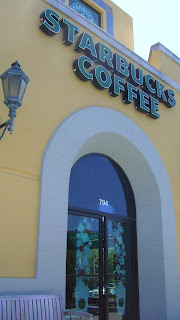 Where I spend too much of my time & energy


It took 3 years before Starbucks finally agreed to hire me- and so several months into my tenure there, I finally asked the store manager who'd hired me why it took so long. "Overqualified." she said, without skipping a beat.

The job I'd held up until that point was at a local Japanese magazine, as an editor. And prior to that, "white collar" positions fill my resume since college. 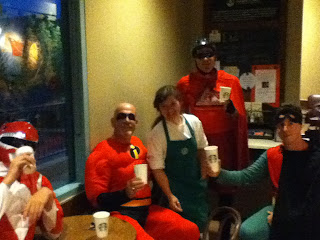 I had to rub my eyes in disbelief when these guys came strolling in. What is one to make of this number of superheroes convening at a Starbucks?! (...let alone MY Starbucks). It wasn't Halloween, so I'm convinced they were the real deal. (and only because I realize you don't know me, yes, I'm being sarcastic)


So why Starbucks? I ask myself that question still - particularly on the hard days - which unfortunately are often. My answer to that question now, is different than it was going in ...somewhat. Going in, my aspiration was to open my own coffee shop-type thing. I couldn't think of anything that looked like a better business model and wanted to learn all I could from the inside and was willing to do so from the ground up. The green apron experience contains probably a blog all of it's own, suffice it to say the experience this side of the counter ain't what it appears to be from that side of the counter and has eroded considerably even in the time I've been with the company. In the interim, the dream of launching a coffee entity of my own gave way to different priorities and this job, while still a balancing act despite it being part-time, earns me just enough to make my thankfully low ends meet and offers the possibility to purchase healthcare benefits should certain requirements be met. 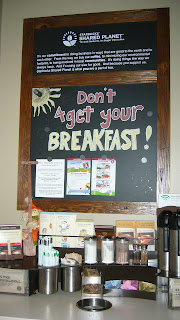 Once in a while they ask me to do the artwork for the store.


The "different priorities"? I began writing songs around the age of 13 and have yet to stop doing so. And I finally "get" that I'm meant to follow wherever it is it proves to lead.

Though this stint at Starbucks is far from an ideal situation, my experience with full-time jobs is that work consumes the best of one's energy and waking hours leaving in it's wake little quality of life. ...and then you die. No thanks. -Mind you, this is my view of full-time jobs as a single, kidless lesbian, so I sure as heck don't get how the rest of y'all do it! I used to, in fact, say half-jokingly to my co-workers back then on my way home for the day, "I'm gonna grab a bite, take a nap and a shower and see you back here in a few short hours for another 8 hours of this!"

This little blue-collar part-time job kicks my ass and everything else, regardless (I defy Howard Schultz to last a week as a barista and triple-dog dare him to be on the television show Undercover Boss), but with it, I get to put what matters most on the front-burner versus the back-burner.

That said... maybe you have found your way to my blog through one of my music project sites.

The Heal Japan EP is the front-burner project at the time of this writing ...which is coming to fruition at such the snail's pace for how slowly I can afford to fund it's progression that it is near exasperating to me at times. And hence, the title of this particular blog entry. Because this endeavor is proving to be a tremendous exercise in it.

The concept for this project came about early this year (2012) centered on a song I'd written in 2009, Nihon Wo Aisu, and is a benefit release in the effort to aid the Tohoku region of Japan still recovering in the aftermath of the triple-fold disasters of 3/11/11. You can hear the demo tracks at the project site. So far, I've managed to get the tracks recorded and mastered and have still the miscellaneous art (photography, disc, cover, & promotional), CD production, distribution, and promotion to take on ahead.

Because I can't move any faster on these next steps than I can manage to sock away to fund them, I'm launching this blog to stay connected, report activity along the way, and to chronicle the brutal reality of the experience as we go -and I thank you for your interest.
Posted by michele at 11:11 PM